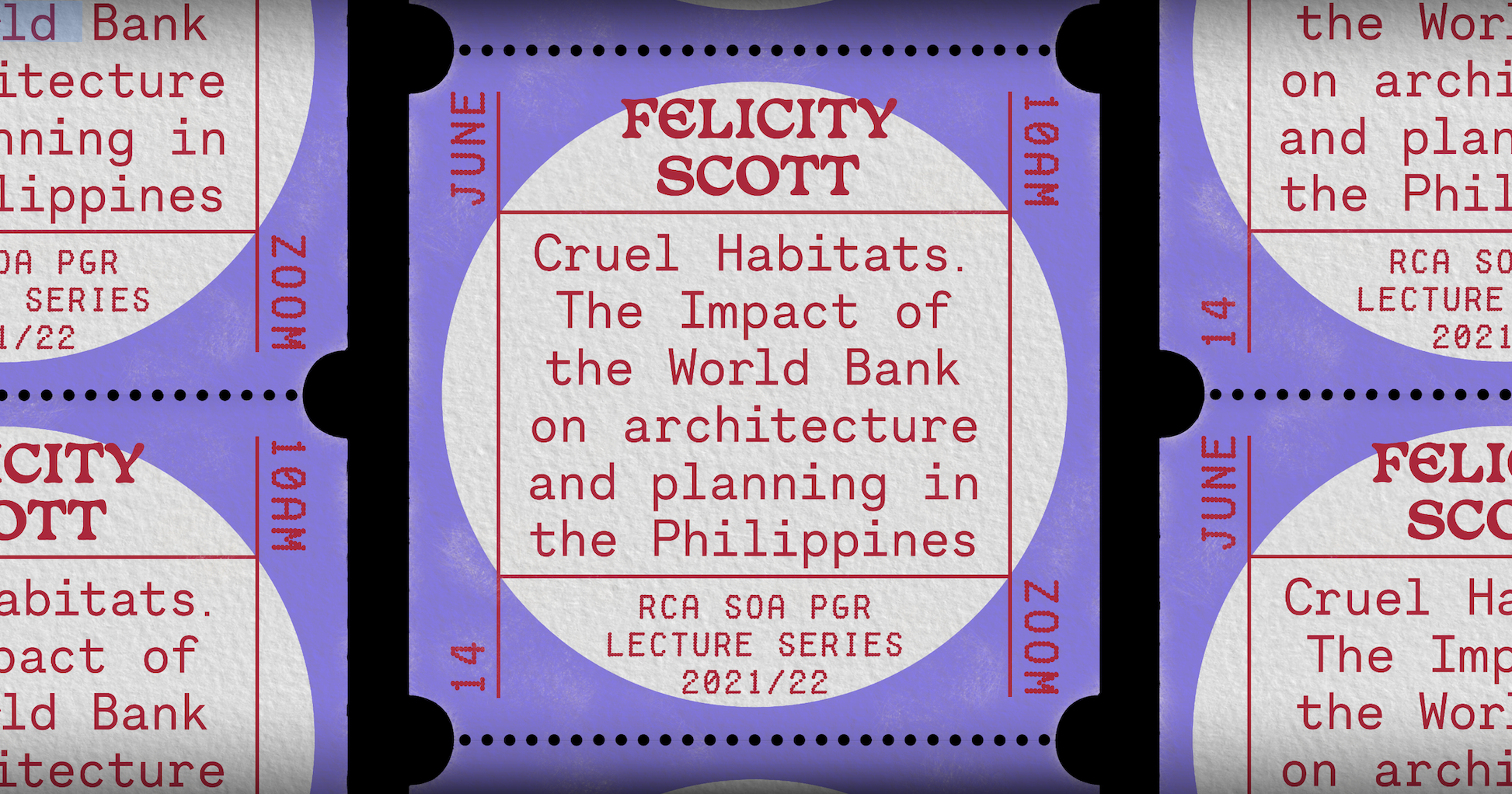 Cruel Habitats: The Impact of the World Bank on Architecture and Planning in the Philippines

Felicity D. Scott is Professor of Architecture, Director of the PhD program in Architecture (History and Theory), and Co-Director of the program in Critical, Curatorial and Conceptual Practices in Architecture (CCCP) at the Graduate School of Architecture, Planning and Preservation, Columbia University. Her work as a historian and theorist focuses on articulating genealogies of political and theoretical engagement with questions of techno-scientific, environmental, and geopolitical transformation within modern and contemporary architecture, art, and media, as well as upon the discourses, institutions and social movements that have shaped and defined these disciplines, sometimes evidently, sometimes less so.

In addition to publishing numerous articles in journals, magazines, catalogs, and edited anthologies, she has published Architecture or Techno-Utopia: Politics After Modernism (MIT Press, 2007), Living Archive 7: Ant Farm (ACTAR, 2008), Outlaw Territories: Environments of Insecurity/Architectures of Counter-Insurgency (Zone Books, 2016), and Disorientations: Bernard Rudofsky in the Empire of Signs (Sternberg Press, 2016). She is the recipient of many awards, including the German Transatlantic Berlin Prize from the American Academy in Berlin (2013), Graham Foundation for Advanced Studies in the Fine Arts Grants (2011, 2017), a New York State Council on the Arts Independent Project Award (2010), a Clark Fellowship (2008), an Arts Writers Grant from Creative Capital/Warhol Foundation (2007), a J. Paul Getty Postdoctoral Fellowship (2002-2003), and a Henry Luce/ACLS Doctoral Dissertation Fellowship in American Art (1998-1999). She is also a founding co-editor of Grey Room, a quarterly journal of architecture, art, media, and politics published quarterly by MIT Press since Fall 2000.

Continuing to work at the nexus of architecture, media, politics, and environment, and still focused on institutional frameworks, emergent techno-scientific forces, and social movements, Scott’s research has turned to address mechanisms of global and trans-national governance and the developmental regimes that inform the shifting topology of the so-called Global North and Global South, as well as to trace colonial and neocolonial exploitation and violence in its many forms, including war, resource extraction, racism, and gender inequities. Following her recent book, Outlaw Territories: Environments of Insecurity/Architectures of Counterinsurgency, current research addresses: the environment and video works of Chilean artist and architect Juan Downey; space colonization during the 1970s and the haunting return of attendant ideologies today; a “global” film program affiliated with the UN’s Habitat conference in 1976, and claiming to produce “documents of reality,” “visual statements,” or even a “world picture” under the rubric of “communications development aid”; and (in conjunction with Mark Wasiuta) a research/exhibition project on Cambodia’s “post-colonial” modernization and its violent reversals from the mid-1950s to the late-1980s entitled “Absent Archives, Media Afterlives: New Khmer Environments.”

This event is part of the
Postgraduate Research Lecture Series 2021/22
.