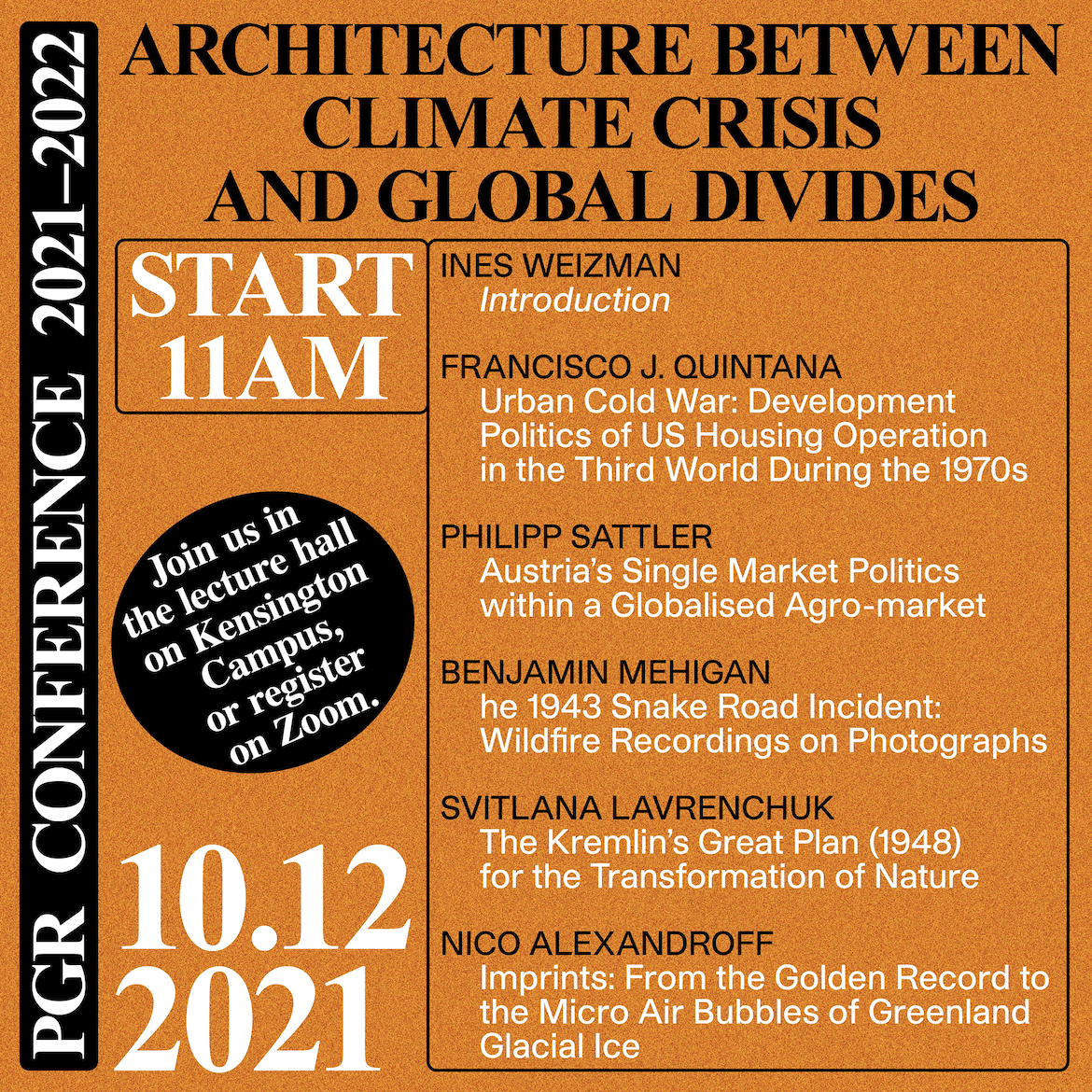 This conference will take place at the RCA, Kensingtons Campus. All presentations will be in-person, but they will also be live-streamed via Zoom.

To participate please register for the webinar.

Francisco j. Quintana
Urban Cold War: Development Politics of US Housing Operation in the Third World During the 1970s
Abstract

Looking at four recent single-family housing projects in Aflenz an der Sulm opens a prompt, an entry point into the site. Asking how they could be built at that particular site, in this particular time, and what forces enabled their construction, takes this paper into the layers of time and space collapsing on the site — an assemblage of documents and encounters with its material visibilities and invisibilities, shifting through the relationship of agriculture and property over two centuries. Defined by policies (decrees, laws), ideologies (capitalism, fascism) and institutions (empires, nation-states, bureaucracies and planning), the paper creates connections through continuities in practices (agriculture, building, markets) that act on the ground and in the very soil, defining forces that tear at the landscape encountered in the prompt.

The paper discusses the impact of the events on the night of the 2nd of March 1994, the closing of successful negations in Brussels for Austria to join the European Union. From 1st of January 1995, this meant the immediate integration in the single market, accelerating structural shifts in Austrian agriculture suddenly faced with the demands of a globalised agro-market, impacting property relations and thus, impacting interactions with soil. These events are not distinct but seen as a continuation of forms and practices of developing capitalism, positioning agriculture and building as practices of violence and exploitation for the creation of value. The paper asks what happens when the metabolic processes of agriculture under the profit paradigm of “grow or perish” produce ever more unsustainable conditions — both ecological and economical — leading to an accelerating degree of transformation of agricultural land into housing plots, sold as farms close down, creating profit through re-zoning, and ending in the absolute devastation of soil sealed under concrete and gravel, under architectures.

Not large enough to be statistically notable nor deadly enough to be significantly memorialised the enactment of this specific extreme incident now exists exclusively within the framework by which it was recorded. This unconscious self-destruction reduces the six hours of its prolongation to one hundredth of a second (1/100 shutter speed) and its area burnt, constrained to just 35mm (or a single frame).

In being photographed, as Trachtenberg writes, its value shifts from a physical presence of matter to a new substantive value now embodied in the image. This destroying of the event has contributed to the recording of the wildfire visual ‘spectacle’ in becoming a symbolic asset in the state’s shared culture, a collective misrepresentation that perpetually abolishes any kind of historical reverence or forewarning.

The full page spread of photographs captured from the night of the 9th December reinforces the dominance of spectacle and visuality in wildfire recording, a prominence, at the time, reserved for combat images and returning veterans.  Akin to images of war, these recordings are vulnerable to contemporary historic reinterpretation and reimagination for a malleable patriotic consciousness.

By virtue of this analogy, is an argument to be made that it was in these early days of ‘photojournalism’ (and all the technical limitations present) when the country’s relationship to its landscape was uncoupled from one understanding of natural phenomena towards one misunderstood through photographic terms?

Following the widespread 1946 drought and subsequent 1947 famine, the territory of the USSR endured an estimate of 500,000–1 million human deaths. As a response to this environmental and humanitarian crisis, The Great Plan for the Transformation of Nature was outlined in the Decree of the USSR Council of Ministers and All-Union Communist Party (Bolsheviks) Central Committee on October 20th, 1948, transforming Stalin’s vision into an actionable plan.

The strategy proposed by the project was a colossal tree network of shelterbelts and windbreaks spread across arid steppes of the southern Soviet Union in 8 distinct highways. The 5300km long network was designed to act as a defense mechanism against the drying winds from Central Asia, which were thought to cause the drought. It is difficult to avoid a comparison with a military operation, where individual elements are organised in repetitive mono-systems as a response to a conflict. Planned for completion in 1965, the projects of The Great Plan were mostly abandoned after the death of Stalin in 1953.

The Great Plan happened at the height of soviet power and can be seen as a derivative of an aggressive reformation of agricultural land use. Forced collectivisation of agriculture in 1929-1932 saw a rapid loss of control over soil and a collapse of an existing land use system. The abrupt replacement of small‐scale farming by kolkhozes and state farms stripped all previously achieved success in land settlement and land consolidation of its basis. With forced collectivisation, the decisive prerequisite for the introduction of crop rotation was lost for a long period. The law “On the Protection of Socialist Property,” drafted by Stalin personally in August 1932, extended the property claim by the state on grain already in its stage of growth ripening on the fields. As a consequence, all harvest losses were now at the expense of the kolkhoz members. In the summer and autumn of 1932, some starving kolkhozniki were shot in accordance with the new law, because they had stolen ears from the fields.

By framing soil as a finite resource and an extension of people’s identities, the paper aims to challenge capitalist land use management systems centered around extractive modes of existence and to investigate the cultural meanings, representations and values of soil across agricultural societies at the frontline of the climate collapse.

This paper aims to present a series of diagrams and meteorological mappings and data that led to the Deep Freeze phenomenon in Texas in February 2021. It collects and layers evidence to present that the uncharacteristic cold snap that hit the region can be more closely related to the melting ice of the Arctic. By doing this the paper aims to present concepts of ‘closeness’ in spatially disparate geographies. It will study the process of so-called “arctic amplification” which are positive feedback loops that explain why the region is warming twice as fast as areas further south.

This case study is viewed in relation to the recently published ‘Glasgow Climate Pact’; an outcome of COP26. Following a short reflection of the document that was issued by the United Nations; Framework Conventions for Climate Change on the 13th of November, the paper aims to show the shortcomings of the Loss and Damage fund. The Loss and Damage fund will be viewed in relation to a survey of current geoengineering technologies which are designed to slow arctic amplification and in doing so whey up the governing methods of hard and soft planetary infrastructure.

Finally, I will argue that the climate crisis needs to be addressed through new global relationships and connectivities that go beyond the nation-states, but more, humanity as residences of the atmosphere. This paper argues for the important role of spatial design and communication in curating the stories, ecologies of attention and imaginaries with the ability to enact change.

4:15 pm
—
5:00 pm
This is some text inside of a div block.
Final Discussion Followed by Refreshments
Abstract