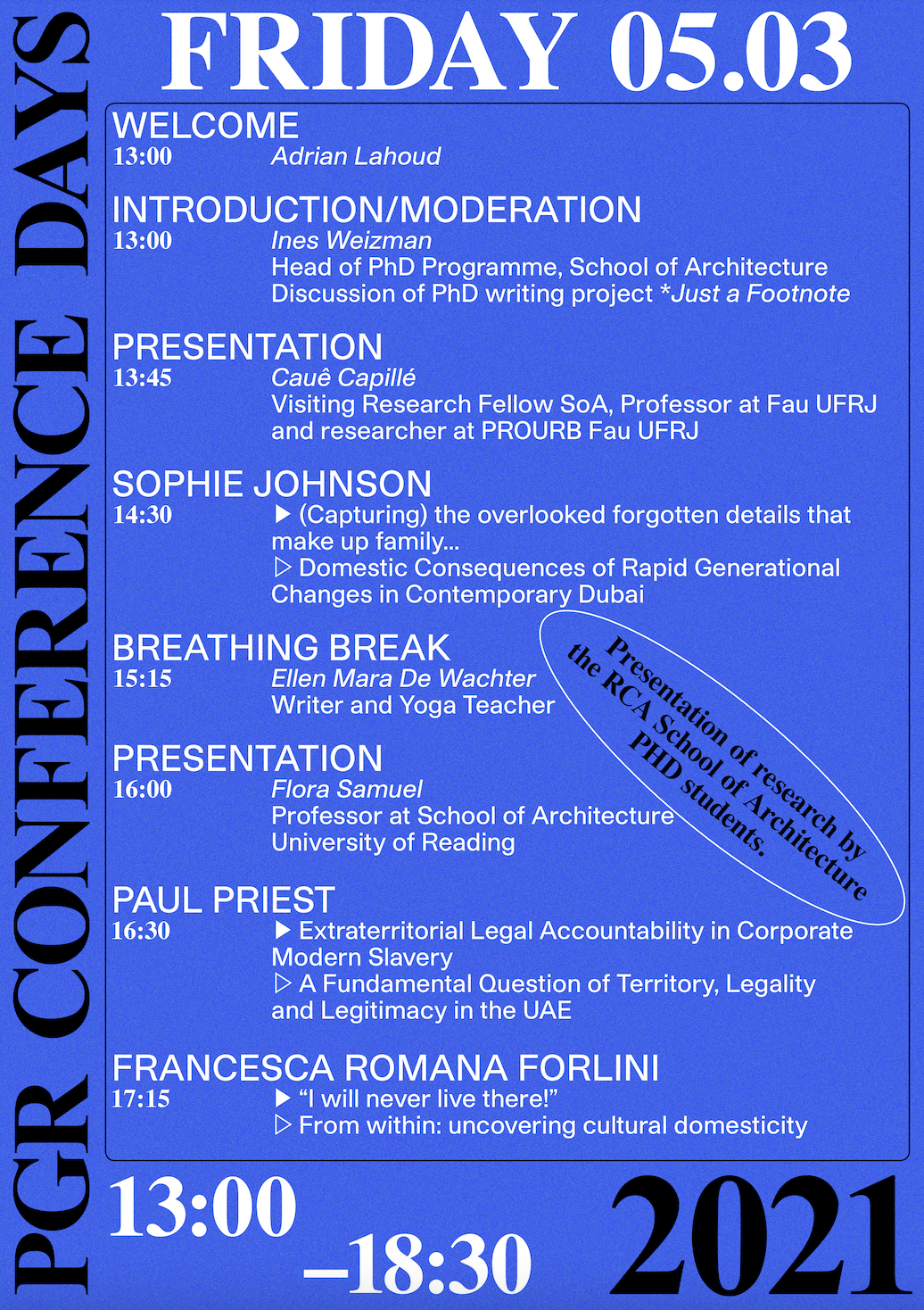 Register to attend
Facebok
Recording of Event
This event is part of the
Postgraduate Research Conference 2020/21, Term 2 "Protagonists"
.

Lamya Gargash is an Emirati photographer who documents forgotten spaces in public and private realms of Emirati society. Lamya goes as far to suggest that some spaces may only loosely represent its original authentic function, as globalisation has had it’s consequences even on the private domestic space. One of her collections focus on the weekly visit to grandparents home, capturing the family dynamics and the hidden details that made up her visits. Photographs visualise moments of time, oral histories tell the stories. The domestic is returning to a position of cultural prominence.  Space, place and time are all containers in which domesticity has been considered. Since the 1970’s many shifts in demographic organisation of families and households have occurred, far greater diversity in peoples’ domestic arrangements now occur. What can interior space tell us about the lived experience? How does space inform domesticity or does domesticity inform the use of space? Domestic interiors are complex spaces and typically, most architectural criticism does not consider the inhabitant as the focus. By focusing on the interior as the main platform, this can reveal patterns of cultural etiquette, identity, gendered spaces and family practices. These revelations allow glimpses of untold cultural histories, away from the more formal, state driven or global lines of documentation.

Paul Priest
Student Paper
A Fundamental Question of Territory, Legality and Legitimacy in the UAE
Abstract

In responding to the question, ‘How can RIBA chartered architects uphold their Code of Professional Conduct and comply with all applicable legislation concerning modern slavery?’, this presentation will attempt to first trace extraterritorial legal accountability across the jurisdictions of the UK and the UAE. It will outline a significant shift in the structures of governance from horizontal to vertical relationships, non-foundational to foundational belief systems, secular to religious jurisprudence and from principles of rights to those of duty. Perhaps the most significant, however, are the polarised territories in which these laws manifest; one intrinsically tied to the land, and the other, to the self.

Extraterritorial legal accountability is a persistent strategy of European policy shapers tackling corporate modern slavery. Typically founded on the Universal Convention of Human Rights, this standard provides a rights-based approach to fundamental human rights to be universally protected. Its corpus is stripped of religious ideology to facilitate its universal application to recognise human rights as the foundation of freedom, justice and peace. This purposefully secular text, however, has realised limited integration in some parts of the world, an observation evident particularly of the Global South. Further, the non-ratification of international human rights treaties in some ‘Muslim countries’ is alluded to by some as complicity in the crisis of human exploitation endemic in global supply chains. The reality, however, is certainly more complex. Before we seek to increase accountability, should we first ask, ‘of whose territory?’, and ‘whose law?’.

It is hoped to map lawscapes across jurisdictions not to highlight their differences but identify their common foundational beliefs. Consequently, it suggests that rather than expanding the borders of our own territory, we might share and inhabit others. For until society can conceptualise social justice from a point of legitimacy for all its members, the intended outcomes of legal accountability will continue to remain elusive.

This is what Madame M. told herself and those close to her while looking at Fernand Pouillon’s Résidence Point-du-Jour. She lived for over 40 years in the Boulogne-Billancourt district in Paris and grew up inside an Hausmannian bloc, very different from the modernist ensembles built not far from her childhood home, right by the river Seine. Tied to her petit-bourgeois heritage she always pictured herself inside one of the typical 19th century blocks, and like most of Parisians despised the tall, modern towers that occupied the southern part of her neighbourhood. Decades ago, while searching for a new apartment, she ended up visiting a bright, empty flat at the 10th floor of Point-du-Jour. In that moment, she confessed to me, she forgot about the exterior and fell in love with what became her new home. The flexible design of Pouillon’s modernist estate was able, and it still is today, to accommodate different needs and aspirations. This story demonstrates that current debate around the value and fate of post-war housing is still open. In France more than half of the population lives inside post-war housing, 40% of them are middle-class citizens like Madame M. Most of them dislike the external appearance of their house, but love living in it. The stark difference between facade and dwellings is even more evident while comparing the interiors envisioned by the architect and the apartments as they are today. This paper will look at process of inhabitation of the modernist interiors of the Résidence Point-du-Jour, bringing forward a cultural understanding of the domestic based on a series of everyday practices that define the dwelling’s layout, use and modifications. This investigation on contemporary domesticity will also cast new light on the cultural value and significance of post-war housing.