Infrastructures of Solidarity and Care by Social Movements

My thesis draws on the series of social movements that sprang up during the last decade to provide support to marginalised groups and their needs as a form of collective direct action to investigate how they create micro-infrastructures for care provision and interrelate in various forms with state institutions.

The argument of my thesis is that during the past decade, social movements have rendered the infrastructural domain as one of the most important public sites of collective participation and struggle. Through my research I find that social movements are wiring the activities of their spaces with the devices, networks or architectures that they deem worthy of local attention or concern. From decentralised spaces and interiorities diffused across the city to concentrated consolidations of social movements in the same area, infrastructural projects of solidarity and care, become techno-material artefacts that social movements take upon themselves to design, service and maintain. This thesis claims that such interventions signal the rise of protocol systems and design of prototypes to capture the qualitative data, design methods and relationships between different subjects and space; a fact that speaks for the transformation of the urban syntax and architecture, directly challenges the public qualities of welfare infrastructure, and reflects the power of solidarity bodies that enable another way of “infrastructuring”.

Alongside an in-depth discussion of how spatiality becomes complicit in the concept of institutionalisation of the activities of social movements, this research explores the engagement of numerous social movements in the emancipatory solidarity movement for care provision (healthcare, housing, education, food) in the aftermath of the 2008 financial crisis, and their activism as part of the anti-austerity movement. Focusing on Athens, the main finding of this thesis is that institutional structures require social movements to monitor the spatial manifestation of their activities through data quantification systems —such as templates, matrices, legal and administrative protocols and portals — but, most importantly, to produce design work and drawing packages in the form of ‘tender’ submissions. Essentially, in my thesis, I investigate through architecture, the system-building symptom of these initially small-scale independent infrastructures and their attempt to scale up the spatial, organisational and technical systems that originated in one place, growing in response to particular ecological, legal, political, and institutional techniques. This conception places a focus on practices of routinisation and extension, standardisation of space and architectural elements and, finally, of adaptation of protocol systems into a digital record.

By charting an inclusive history of their activities, including political activism and spatial occupation, my work has as an aim to highlight new networks of exchange and expertise among social movements, along with the agency of social movements in design histories, but also to link the multiple forms of resistance as they develop connecting these otherwise dispersed geographies to an infrastructural movement centered around solidarity and care. In the work of these social movements, my thesis explores how other kinds of infrastructure are also visible rendering possible an international movement that reproduced large communities who gathered on site, established self-organisation protocols, reconfigured welfare protocols and care prototypes to provide, protest and protect, and they did so by establishing social and ecological interdependence and connection across borders.

Elisavet Hasa graduated with a PhD from the RCA in 2022. Congratulations! 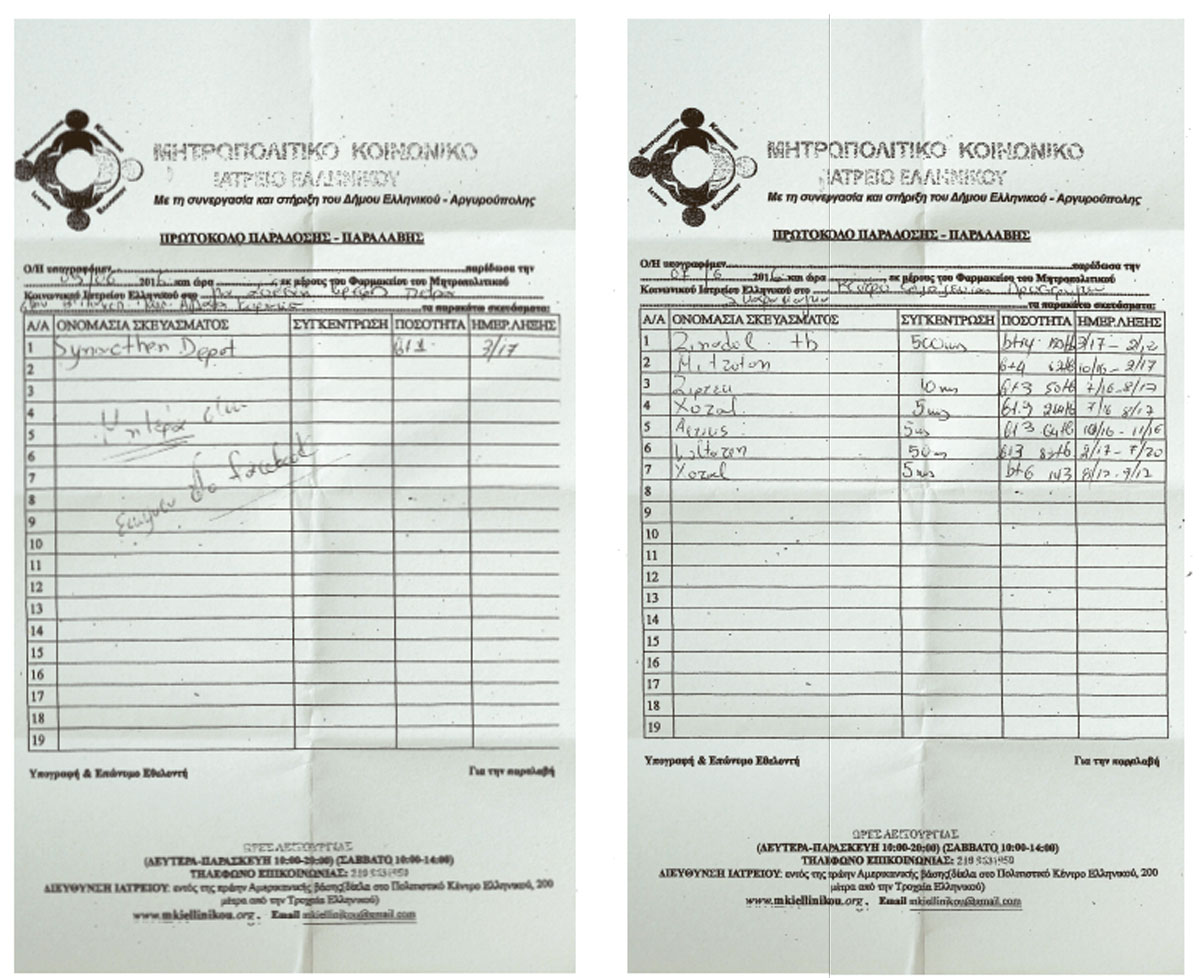 Protocol of delivery and receipt of medicine provided by the Metropolitan Community Clinic and Pharmacy of Helliniko. Credit: Elisavet Hasa 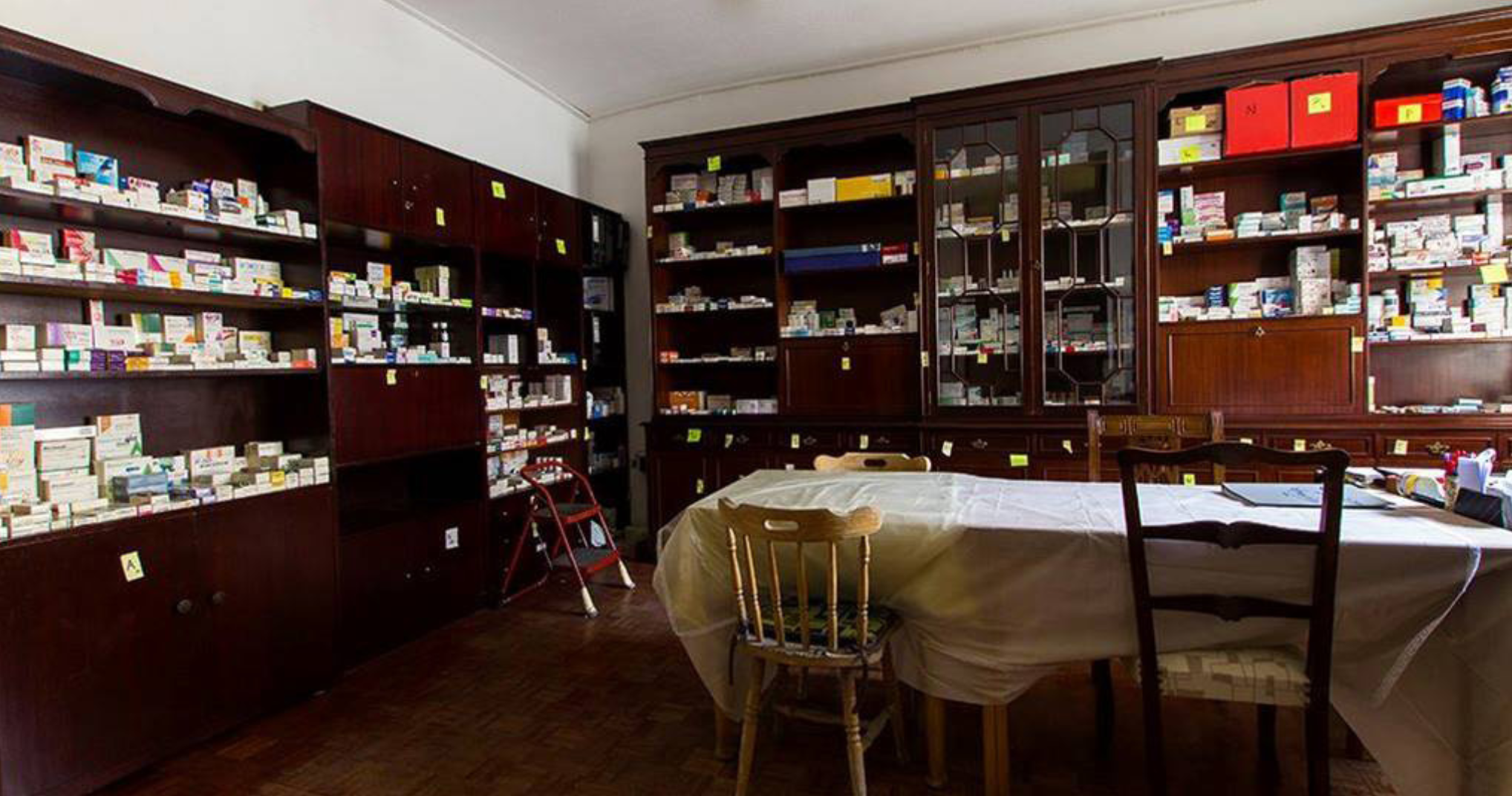 The initiative of pharmacists and volunteers transformed the interior of a flat to provide pharmaceutical care and distribute medicine. 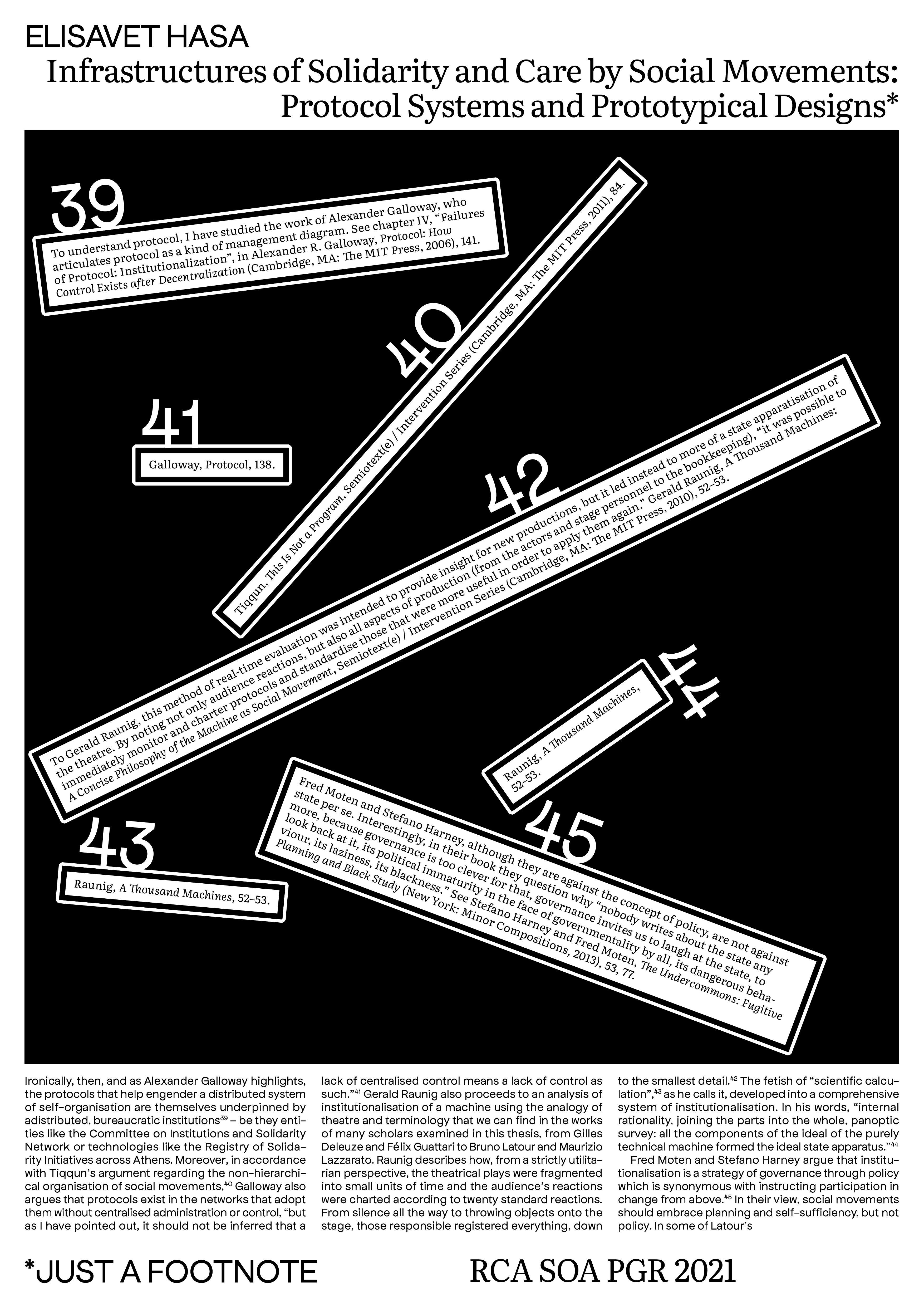