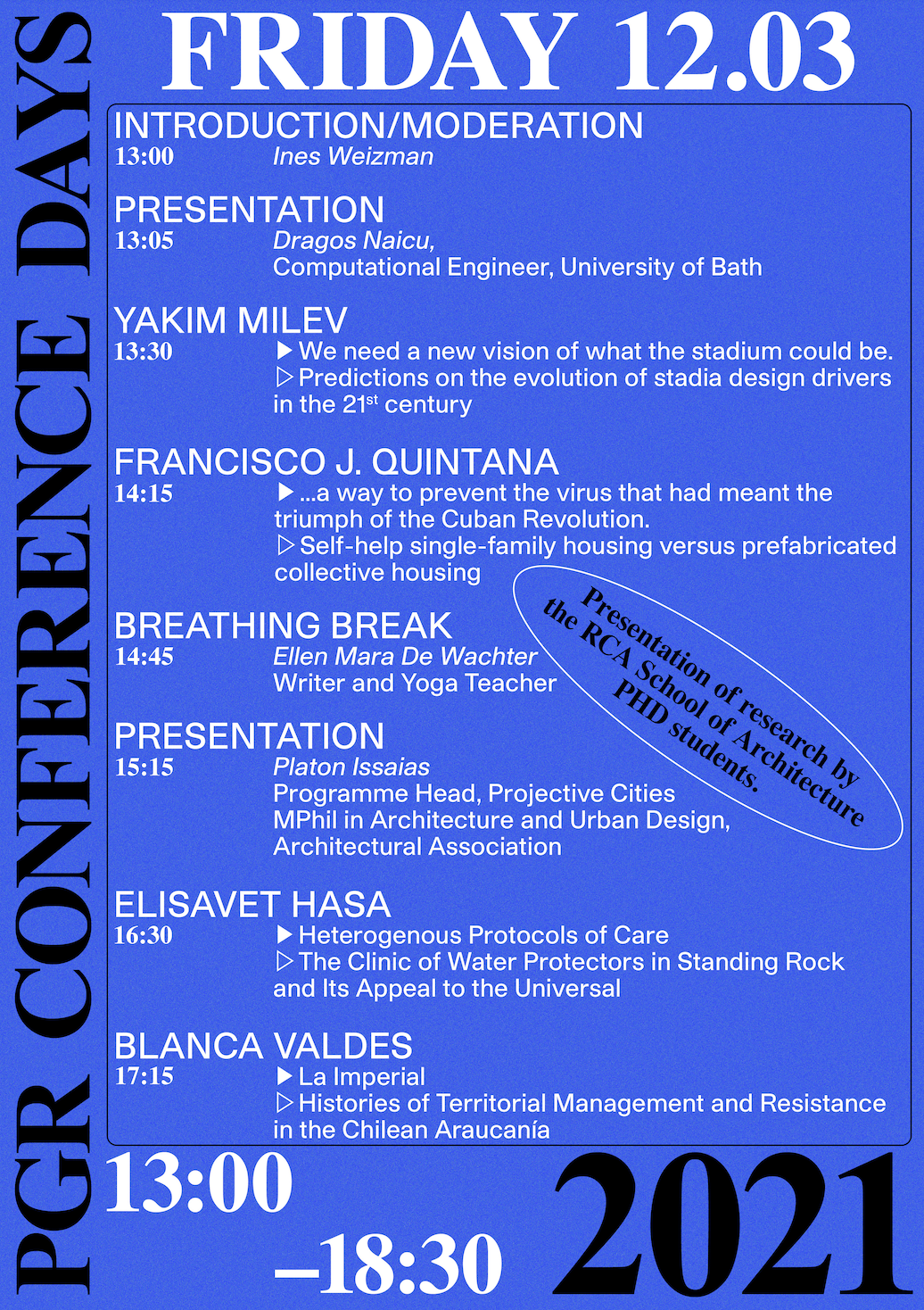 Register to attend
Facebok
Recording of Event
This event is part of the
PGR Conference 2020/21, Term 2 "Protagonists"
series.

Stadia are one few morphological typologies within the Western, and more recently global, city that have remained virtually unchanged since antiquity. Their story is an inseparable part of the development of Western civilisation and even in periods when sport was considered subordinate to other cultural or religious movements the vestige of this typology remained an inspiration for architects and thinkers alike. In contrast to the majority of pre-Christian temples and religious structures, stadia where not condemned to demotion in the Medieval period and when the interest in this genre re-emerged in the late 18th century there was a set of existing examples for designers of such structures to follow. Nevertheless, the story of how we re-learned the lessons of the past is nothing less than an odyssey of dramatic disasters and unprecedented successes. The last hundred years saw stadia evolve from a landscaping feature in green space legislation to a strategic asset for urban regeneration. The work of Geraint John was one of the major contributors in the evolution of our understanding what a stadium is, how it functions, and how it is related to the urban and ecological environment. The quote in the title is from an interview with Professor John taken on the 23rd of February 2021 and refers to LOBB Architects, later known as Populous, work Stadium for the 1990’s – a critical interpretation of the design requirements proposed by the Taylor Report.

John was Chief Architect and Head of Technical Unit for Sport at the United Kingdom Sports Council for more than twenty years. Safety was the primary concern in this period, and he took an active role in the development of the early editions of the Green Guide for Safety at Sports Grounds and the Safety of Sports Grounds Acts. In the early 1980s John co-wrote the Handbook of Sports and Recreational Design. This design manual set the basic stadium design drivers that evolved and become more elaborated in the following decades – compactness, safety, convenience, comfort, flexibility, and economy. Following the Hillsborough disaster John led the discussions for the future of stadia in the UK and rewrote the section on stadia in the second edition of the Handbook of Sports and Recreational Design in 1991.

In an interview conducted in February 2021, Miguel Lawner suggested that the implementation of large-scale self-help housing plans was meant to prevent the influence of communist ideology in Latin America during the 1950s and 1960s. The first self-help housing project supported by the United States was built in Santiago de Chile in 1954, following an agreement on technical assistance signed between both governments in 1951. This self-help strategy was then replicated all over Latin America in the context of the Truman Point 4 for international collaboration –enacted in 1948– and following the Alliance for Progress, proposed by John F. Kennedy in 1961. By 1965, the recently founded Chilean Ministry of Housing and Urbanism massively expanded the mentioned self-help strategy through the Operation Site, a public policy directed to give a housing solution to the poorest people living informally and in precarious conditions. In five years, it distributed 71.000 lots to more than 380.000 people living in extreme poverty. The informality was regularized through large urban fabrics of single-family houses, built by the new landowners. It was a market-oriented strategy, which disseminated liberal ideas of individual freedom and capitalism, and the 'mirage' of democracy and social participation. The communist party heavily criticized this approach because they considered it a form of exploitation of lower-income sectors. The opposition nicknamed it as the Operation 'Chalk' since poor people were buying only an urban plot outlined with that material. In 1970, President Salvador Allende, member of the socialist and communist coalition, banned this self-help housing policy. Instead, among other urban developments, Allende's administration built a prefabricated collective housing factory donated by the Soviet Union in 1972. The KPD factory ('krupnopanelnoye domostroyenie', or 'large-panel housing construction') built new neighbourhoods in Valparaiso's region with multi-storey buildings made of panels.

This paper will reflect on two different cities: One city made of single-family self-help houses built between 1954 and 1970, which began with USAID support. This experience was continuously studied and closely followed by several US institutions –the World Bank implemented this same self-help strategy in 37 developing countries years after, between 1972 and 1981, through the Site and Services housing projects. The other city was built with collective prefabricated housing supported by Soviet Union's experts. The latter lasted a few years after Pinochet's 'neoliberal' dictatorship (1973-1990). The Soviet prefab housing factory was appropriated by the dictatorship until 1981, before being dismantled.

Miguel Lawner was the director of the Urban Improvement Corporation at the Ministry of Housing and Urbanism during Salvador Allende's administration (1970-1973). After the military coup of September 1973, Lawner was imprisoned for two years in Dawson Island, south of Chile, before going into his exile in Denmark until the mid-80s.

This paper aims to investigate the decentralised and de-territorialised networks that the protocols of social movements exist in order to explore the healthcare social movement as a system that connects different micro-infrastructures. In an interview with Alexander Galloway centred around his book Protocol: How Control Exists after Decentralization, he stressed that “in a seeming paradox, with protocols you have a peak of heterogeneity and difference, but you also have an appeal to the universal.” Reflecting on how this condition has been expressed in the context of social movements from pirated archives to infrastructures of refusal, the discussion focused on the anti-pipeline movement that started in Standing Rock Sioux reservation about five years ago, and speaking about the notion of Indigenous protocols, Alexander Galloway argued how “this could be part of the political call, which is to say, don't annihilate difference and don't infringe upon real radical difference; yet, don't destroy the water and the earth — there's always an appeal to the universal — we are not protecting the water, but the water is protecting us.”

This paper unravels the context of the revolutionary moment of the emblematic #NoDAPL movement when several critical de-institutionalisation and politicisation events triggered the mass organising of collective groups and individuals resisting the implementation of a certain infrastructural model -oil pipelines- as a form of economic and collective life connecting this otherwise rural geography to the world and the massive solidarity organising internationally, in order to speak about this dimension of universality that defines protocols of organisation and spatial configuration.

To do so, this paper argues that the architecture of repression and hostile environment against the encampments of water protectors in Standing Rock —consisted of chokepoints, armed checkpoints, concrete barricades, armored personnel carriers, and miles and miles of concertina wire dotted what wasotherwise a rural landscape, in addition to the intensification of police and military presence— influenced immensely the types of infrastructural projects and the main activities taking place in the camps, making clinics to treat the protectors and activists, the core infrastructure for collective care and healing. By revealing the birth of the clinic of water protectors, this paper investigates its operation as an infrastructure for a system of decolonised healthcare.  In addition, this paper finds that during the #NoDAPL protests, the medical care provision activities at the camps filled in gaps for the entire community in this area of Standing Rock making visible not only the environmental but also the healthcare battle across Native America. Precisely, this paper claims that this ad hoc infrastructure of care emerging from the Standing Rock anti-pipeline movement expressed as a material claim made to the healthcare services was a struggle towards Indigenous public health and the decolonisation of medical care provision, based on situated needs but also gained its power from a universal network of struggle for a holistic healthcare system.