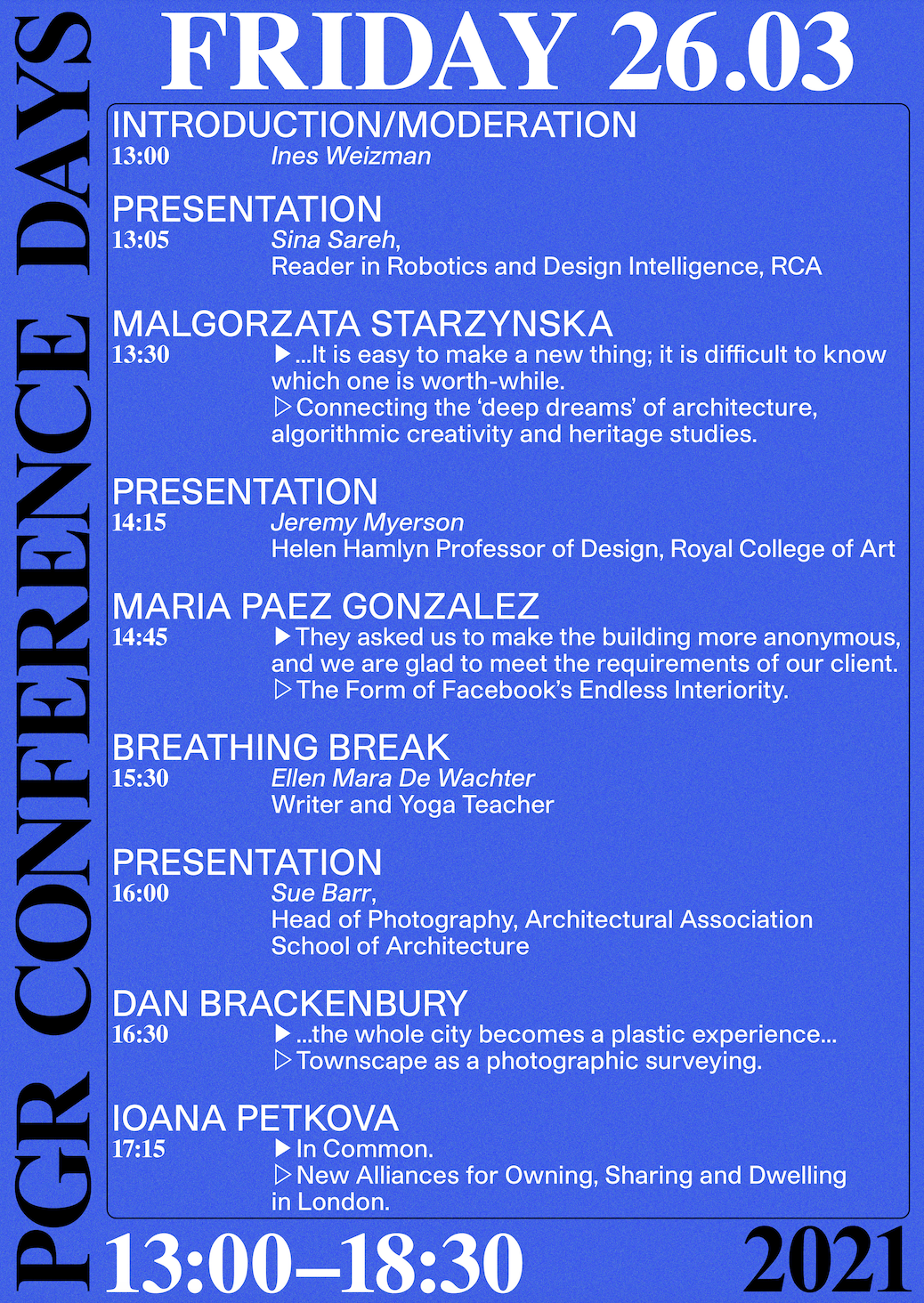 Register to attend
Facebok
Recording of Event
This event is part of the
Postgraduate Research Conference 2020/21, Term 2 "Protagonists"
.

When asked about human’s agency in the algorithmic work, Mike Tyka, the co-creator of Google’s ground-breaking DeepDream project, pointed out that the artist role is to determine which work represent novelty. What emerged from his practice, is that machine learning (ML) artwork offers possibilities for an endless stream of artwork; however, their creative value is determined by the artist’s careful selection of both the data and the final outputs. This paper looks at the opportunities presented by the algorithmic perception and methods to discover “the new” in existing archives. Algorithmic creativity is positioned as a bi-product of synthetic perception, and ML models are investigated for their capacity to perform architectural heritage analysis and archival studies.Application of ML to architectural criticism, specifically pedagogical methodologies, is yet to be proposed. The algorithm’s cognitive mechanisms and data’s role need to be examined and understood to identify the opportunities for the alternative methods in architectural history offered by the AI. This paper interrogates the task of vision through contemporary theory and positions it as in direct conflict with anthropocentric analysis of visual data. Here, the labour of perception is framed as a mathematical function consolidated by the ML and artificial neural networks (ANNs) into a statistical model.This paper argues that ML should be applied to heritage studies by challenging existing datasets supporting traditional archival studies. ML mechanisms replicate and amplify the tendencies of data distribution, making visible some of the most subtle implicit truths. Building on the current critique of data bias, the paper interrogates the process of algorithmic learning and differentiates between the modes of prejudice introduced by both content and data formats. In doing so, it argues that the algorithmic bias could become a method for a critique of the overlooked social and cultural symptoms and a critical tool for unlearning in architectural theory. ‍

The word campus is used to describe the series of architectures that constitute the sprawling footprint of Facebook in Menlo Park, California. The site where the firm is headquartered, is formed by an accumulation of various mid-century office parks like MPK 46, detached single-tenant buildings that saw the dawn of specialized small-scale manufacturing of the inter-war and post war era, 1 Hacker Way, the 1990s corporate campus model, stemming from the tradition of the east coast suburban R&D buildings that appeared as early as 1930 for the specialized new branch of work, corporate research. The Bayfront corpus, MPK20, 21 and 22, constructed and designed in sequence for the company by architect Frank Gehry, and that in themselves trace a progression from the boldness of the first project MPK20 to the compromising form and height of MPK22, and lastly, the newest development Willow Village, a 59-acre parcel of land occupied by some of the earliest of these types, rezoned hastily by the city upon Facebook’s land purchase, the project which is at early stages of planning will include buildings other than office, namely retail and controversially, housing.‍These typologies, the thesis proposes, are part of a genealogy. One that exist simultaneously and forms the city, that describes the relations resulting from the subsuming process of corporate growth and power, and most importantly a morphology of knowledge work and its constituting force over not only those who occupy and exercise their labour power within them, but those who are its neighbours, and us, the public, the consumers-producers of their products.‍The following chapter centres on MPK 20, a building Mark Zuckerberg, the company founder and CEO was famously invested in and the first ever built project for the company from the ground up, that when observed through the projects that preceded and succeeded it gains new agency, as it fails to create physically what the company allegedly intends to build digitally, a lucrative platform for self-valorising activities, social cohesion, and cooperation.

Gordon Cullen’s 1961 book, Townscape, is a collection of essays, sketches, photomontages and typographic experiments from the Architectural Review and has, in many ways, come to represent the Townscape movement and the conservationist political agenda with which it is often associated. Cullen, who was known variously as an architectural draftsperson, illustrator, delineator, commercial artist, renderer, consultant or even by his own terms ‘metabuilder’ or ‘archibuilder’. His work has been criticised for espousing a nationalist ideology which may have promoted a regard for the picturesque, a scepticism for modernism and a concern for conservationism, which can be seen to have had a major impact on traditionalist planning policies in the latter half of the 20thcentury. Some also assert that his ideas were innately superficial and have ultimately contributed towards a broad acceptance of highly decorative architectural practices such as facadism.

This research will seek to demystify and debunk these claims by developing a contrary understanding of the practitioner and his methods. Cullen’s whimsical sketches, innovative collages and investigative photographic methods demonstrate how he integrated his strategies for observing the character of the urban landscape into modern and often radical designs for new urban spaces. We can see from such schemes that Cullen’s intention might not have been entirely concerned with protecting and preserving the picturesque qualities of the urban terrain. Conversely, his work might actually be read as a framework to help recognise urban features that are significant and a polemic which urges city-goers to engage in a dialogue as to why they are so.

Through this alternative perspective, Cullen’s work might offer a new contemporary toolkit for reading cities through the eyes of the citygoer, rather than through the technocratic, clinical and expansive lenses that we often employ in urbanism today. One of Cullen’s legacies is that he outlined a type of observational blueprint for people find, document and discuss distinct characteristics that might be located within a town or cityscape. He invited people to adapt and rework these approaches and expressed an interest in people finding their own ways to depict the urban topography. This research will discuss the implications of returning to these methods in contemporary urban settings of contestation and change, considering how they may provide new, optical approaches to record the sightlines and experiences of human beings moving through the built landscape.