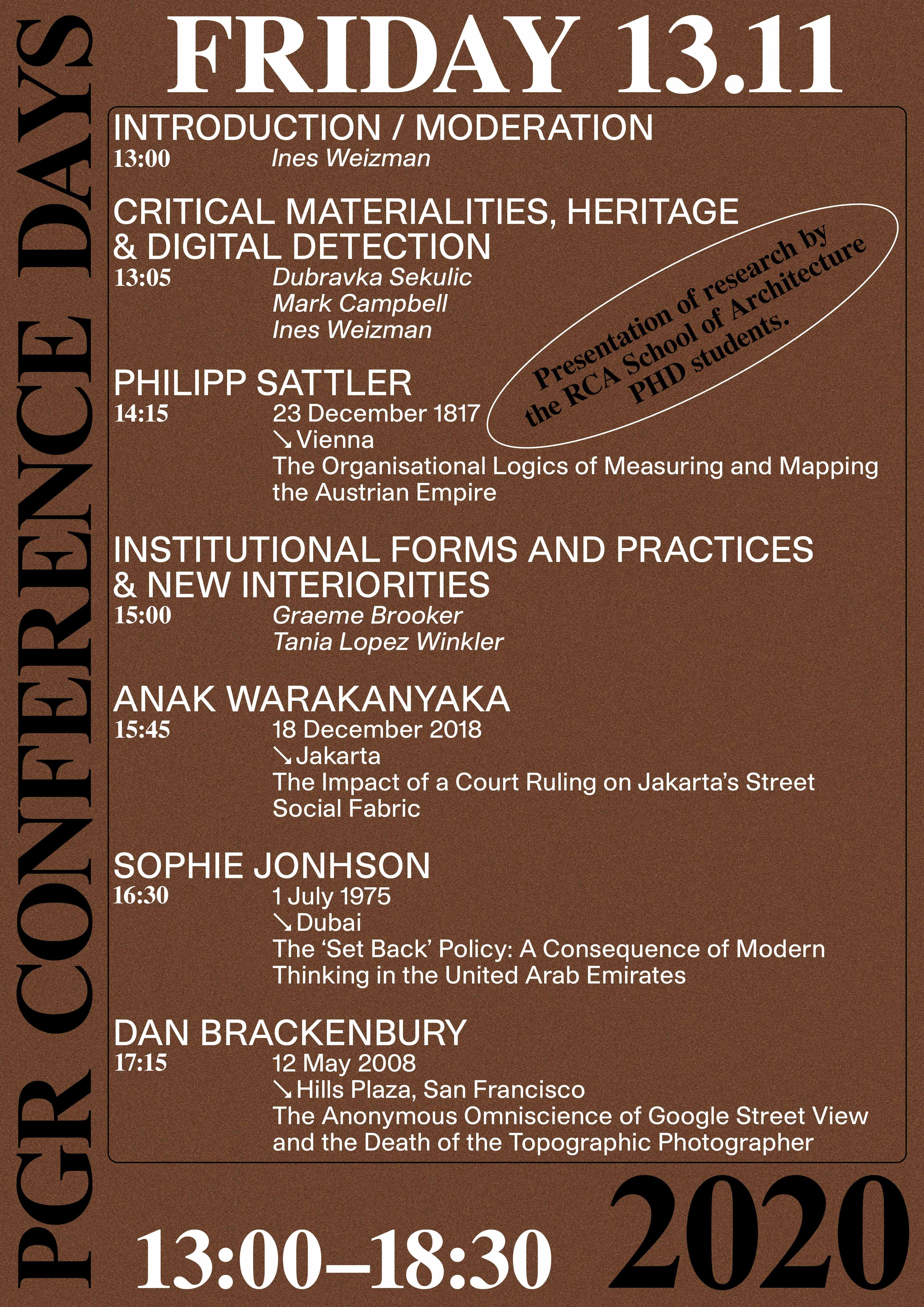 Here is the long description. 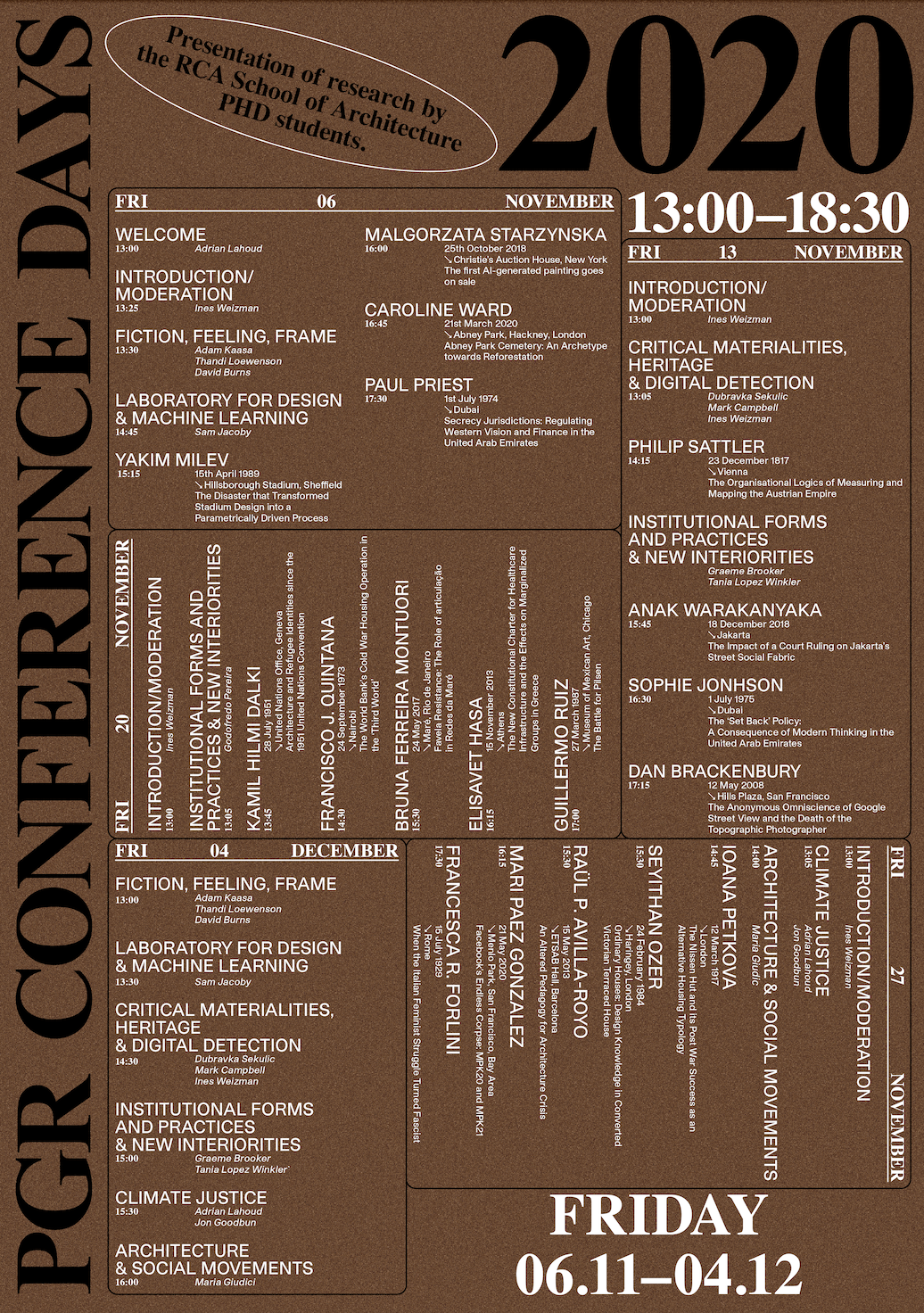 One could argue, there is no climate change issue without looking at social movements and social change, and institutional forms and practices that shape architecture and design. In the same way, climate is being registered in the materiality – organic or inorganic – of our environment: in architecture, modalities of living, the history of ideas and cultural heritage. This panel presents works that examine architecture as accumulated material histories that can be analysed at microscopic, even molecular scale, to reveal the layers of a fossilized past, but also give evidence of the large-scale geopolitical entanglement of infrastructures of material movements and the exploitation of the human and natural resources. New methods of digital documentation and detection, data analysis and machine learning are employed in reflecting on new relationships and meanings of architectural and urban design.

On 15 November 2013, during the first Panhellenic assembly of the healthcare social movement in Greece, the doctors of the MKIE (Metropolitan Social Clinic of Elliniko) in Athens presented a new Constitutional Charter of Common Principles of the Solidarity Clinics and Pharmacies, that went into (immediate) effect that same day. Already the introduction paragraph explains the necessity for the newly elected and movement-ally Greek government of SYRIZA in 2015 to introduce this new policy as a Health Reform, referring to the economic crisis that has revealed a more profound crisis of values and institutions: “The dismantling of public healthcare structures and the transformation of health from a public good and a human right into a mechanism of exclusion is one of the many, and for us the worst, consequences of the implementation of the harshest fiscal austerity policies by a government in the recent years.” This context exemplifies the interplay between state institutions and the healthcare social movement during the years of crisis in Greece from 2010 onwards, a dynamic fact that reached high levels of consolidation during the SYRIZA government (2015-2019).

This paper investigates the spatial dynamics of the solidarity clinics and pharmacies in Greece as a way to understand how the clinic as infrastructure creates different relations between subjects and the city. For that purpose, it focuses on the most emblematic case of the healthcare social movement, the MKIE in Athens to speak about the larger healthcare social movement as a system. This paper aims to review the charter of 2013 and compares it not only to the Health Reform that followed in 2015, but also to its latest revision during the 6th Panhellenic - virtual - assembly of the healthcare movement in June 2020, that includes two new threads of action: First the movement’s proposals for the organisational and spatial reconfiguration of the healthcare infrastructure in order to respond to the pandemic crisis; and second its commitment to continue the struggle alongside their international counterparts against racism and dispossession strategies of violence by institutions that are on the rise, and in solidarity to refugees and other marginalised populations. The aim of this paper is to examine how both proposals will have major consequences for the more inclusive planning of architecture and administrative infrastructures, but also to reveal how the solidarity clinic brings together different conceptions of infrastructure and care enabled by social movements and material claims made to the city’s healthcare infrastructure.

On 24 September 1973, World Bank President Robert McNamara addressed his Board of Governors envisioning the eradication of 'absolute poverty' in developing countries by the end of the century. He had travelled to Nairobi, Kenya, seeking political support to increase the institution's funding for accomplishing his ambitious global goal. It required several kinds of developmental projects, in which McNamara included, for the first time, the construction of new urbanisations as part of this international aid agenda. Only one year before this address, the World Bank had launched its first low-cost housing project, just 2500 miles to the west of the speech venue, in Senegal. Ten years later – by the time McNamara ended his administration – this supranational institution had supported more than 90 housing projects in 34 developing countries. What McNamara did not mention in his speech is, somehow, related to his previous job as US Secretary of Defence during the Vietnam War. In a way, McNamara moved from a 'military war' to the 'war on poverty' following similar ideals: to stop communism and disseminate the 'American way of life', this time, through low-cost housing developments while tackling urban poverty. This paper will look at the impacts that these goals had on the urban and social environment in 'Third World' countries.

To trace a part of the history of an urban development operation that was implemented by the United States world-wide with effects on a geopolitical scale, the paper will look at the Global South to show how architecture and urbanism in developing countries were instrumentalised to fortify the conflict lines of the Cold War confrontations. One aim of this paper is to explore the role that large-scale housing constructions – argued to bring development and modernisation to the 'Third World' – played in this confrontation. Another one is to examine how alternative architectural practices of self-help were promoted as a rapid and low-cost strategy to provide housing, but was essentially aimed at disseminating the US vision of world order. This paper will analyse the World Bank's 'Site and Services' housing program deployed in America, Africa, and Asia between 1972 and 1981. It will focus on Latin America not only to show how the ideals of liberalism were spread through new urbanisations but also to closely look at the creation of unexpected geographies of collaboration and negotiation between the South and the North. A contribution of this paper is to explore the relationship between the US and developing countries in the field of urban culture contesting the traditional Cold War dichotomy of 'exploiters and victims'.

Dan Brackenbury
12 May 2008 – Hills Plaza, San Francisco
The Anonymous Omniscience of Google StreetView and the Death of the Topographic Photographer
Abstract

On 12 May 2008, Google headquarters announced the release of a new face-blurring algorithm for their StreetView (GSV) platform. The technology paved the way for Google to extensively photograph cities around the world and for the human beings within these photographs to be made spontaneously unidentifiable. This paper will explore the impact of GSV as it developed beyond a mapping service into large-scale tool that could be used for rigorously observing cities. Its development emerged around the same time as several other technological advancements in photographic surveying, such as drone photography, high resolution CCTV, satellite imaging and large volume metrology 3D scanning. While these new topographic recording methods are very effective at capturing vast, sweeping views of cities, they have also been described as totalitarian because of their privileged capacity to surveil urban space with great precision from lofty vantage points. As these large-scale photographic surveying processes record the physical form of the city with great thoroughness, the everyday features and the unremarkable attributes that are conducive to its character can sometimes be overlooked.

Throughout its history photography has produced numerous urban investigators who have recorded the street in ways that have focused more inquisitively on the equivocal details that impact upon the experiences of people in cities. In the mid-to-late nineteenth century, cultural institutions across Europe sought out pioneers of the new photographic medium to catalogue the disappearing heritage of their cities. The Bibliothèque Historique de la Ville de Paris employed photographers such as Charles Marville to meticulously photograph the old buildings of the city during this era. Instead of simply documenting the concrete physicality of the city, such photographers explored the ambivalent elements that helped to contribute to its most inherent qualities. Walter Benjamin (1931) spoke of these practitioners as detectives, investigating the hidden narrative of the street, Ragpickers gathering offcuts of the city’s character.

In 2010, the photographer Michael Wolf subverted the clinical expansiveness of the GSV technology by using the platform to observe small geographic regions of Paris. Wolf scoured GSV for ‘scenes’ or events unfolding in the city by looking into windows of buildings and peering into dark, shadowy corners of the street. Wolf’s Paris Street View project thus evokes the exploratory, ‘flâneurial’ approach of the late-19th century topographic photographers, reminding us of the more direct and investigative methods that we once employed to visually survey cities. This research will consider how our new, lofty perspectives are potentially detaching us from the enigmatic narratives playing out at street-level, and in what ways the now archaic persona of the topographic street photographer might re-emerge as an agent to help capture such information today.

On 23 December 1817, Emperor Francis I of Austria signed a land tax patent into power. Under the premise of creating a fair and stable tax system, based on the productivity of land and the buildings thereon, it is ordered to create a complete land register and cadastre of the Austrian Empire, mapping property relations based on scientific surveying of land. The enormous enterprise to create the first complete map of 698.700 km2 of the Empire had two major phases taking 44 years until 1861, and three emperors, to complete. While from 1850 the Hungarian part of the empire was swiftly drawn simply and cost-effectively, the first phase, known as the Franciscan cadastre, mapped the Austrian half of the Empire in grandeur and highly detailed colour drawings, depicting land use and property of 300.082 km2 on 164.357 individual pieces of hand-drawn and hand-coloured paper, showing 30.556 cadastral municipalities and 50 million plots of land.

To turn land and ground into property necessitated to establish borders, to exclude, to other. Maps in this manner generate the power of transformation as they offer a vision, a narrative, a story, an image, of new relations to think and act out on the ground. In a moment in European history, the birth of nationalism, after the rupture of the Napoleonic wars that saw the end of the Holy Roman Empire of German Nation (1806), the defeat of France (1814/15), and a new balance of power afforded by the Concert of Europe established at the Congress of Vienna (1814-15), it consolidated and drew precise outer but also internal borders. As a system of classification it created the possibility for the commodification of land as property.

What impact did such a monumental undertaking generate? What did it represent and thus transform in the relations of labour, property, society, and state? And how do the organisational logics of measuring and mapping translate into other endeavours of the empire? This paper will discuss how a predictable and stable tax system begins to rupture the cohesion of feudalism, unpack new concepts of territoriality and state generated, and question the power of representation through classification. It will attempt to draw a line of thinking from the logics of property to colonial practices and place them on the very ground of Europe that it originated from.